After six years of waiting, hoping, and dreaming our forever family finally came true. In May 2017, we were matched with the greatest loves of our lives - two smart, funny, talented, and beautiful daughters. In March of 2018, our adoption was final.

As 2017 approached, Marlon and I started talking about the past six years, how different our life is from 2011, and what we hoped for in the future. We quickly realized that a newborn may not be the best fit for our family anymore. Our home study was amended in January of 2017 to include older children.

In May, we were contacted by a birth family about sisters. It felt right. It felt like divine intervention. A couple of weeks later, we were on plane to meet them. It was love at first sight. The connection was immediate. We knew that these girls were our daughters. We found each other! We had a tearful goodbye with the girls and headed home. I cried all the way to the airport.

The next month felt like an eternity in preparation of us becoming a forever family. On June 17, 2017, our daughters came home with us. It's been an incredible year. Parenting is an adventure. I've never been so tired, at times frustrated, rewarded, and blissfully happy in my life. Before I go to bed each night, I go into their room and look at their sweet sleeping faces and think, “how did I get so lucky?” Their birth family has been amazingly loving and supportive; we're all learning how to be one big family. That means the world to me because you can never have too many people that love you.

This journey has changed who we are, taught us to never give up, people are always cheering for you, to forgive, to be open, to get up when you get knocked down, and most of all to love bigger and greater than we ever could imagine.

I truly believe that we were waiting for them. Without a doubt, our family was worth the wait. This chapter has closed and we're now off doing all the things that families do. Thank you for your unwavering support and love. You held us when we were down and cheered for us along the way. Marlon and I want to express our sincere gratitude to you for being there for us throughout the years. Instead of two cats and cradle, we have two cats, two daughters, and bunk beds and it's absolutely perfect!

It's Good to Be the Cheesiest!

There a new Queen of Cheese in town! I won the 5th Annual Grilled Cheese cook-off competition at my office. My competition was stiff and their recipes were inventive and delicious, so I was genuinely surprised and thrilled when my name was announced!

I planned to go with either a cinnamon toast, cream cheese grilled cheese or a take on apple pie and cheddar sandwich, but Marlon convinced me that meat and cheese was the way to go. So my sandwich was inspired by the White Castle slider. A guilty pleasure. It turned out great.

The morning of the competition, I realized that I used most of the Velveeta and all of the onion in my test batches. Luckily, I have the best sister in the land and she went to the store and brought me my missing ingredients at 7:30 in the morning! Thank you, sister!!

On competition day, I let my butter soften until griddle time. I organized all my ingredient and started make my sandwiches. They were coming out perfect! The bread was golden brown, the cheese was melting nicely, and my co-workers had happy faces! They even came back for second tastes!

The votes were counted and I won by 2! I told you the competition was stiff! I was crowned the queen of cheese. I've always been a cheesehead though! Enjoy the recipe!

Place one slice of bread with softened butter on the griddle, butter side down. Assemble the sandwich - Colby cheese slice, burger patty, steamed minced onions, Velveeta slice, and top with second slice of bread, butter side up. Grill until golden brown and cheese is melted. 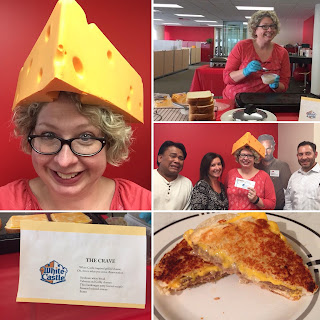 Wow! It's been almost a year since I've written my blog. We've been busy changing our lives and the year flew by. I'll catch you up!

Last fall, we decided it was time to leave New York City and return to our hometown Virginia. You can always go home again and it's been great. Moving back to Virginia was the best decision that we've made.

In the past year, we have just about changed everything except our happy marriage and our two cats. In January 2015, Marlon and I moved to a historic neighborhood that's close to my family. We started new jobs and bought a car. Sadly, I lost my grandma and mom after long illnesses. I'm thankful I got to spend some time with them early in the year. Our adoption home study has been completed for Virginia. Last month, we closed on our dream house! An 1880 Victorian townhome, which we are renovating. It's been a whirlwind. All of these things could be stand-alone posts, but I'm moving forward these days. I never thought Virginia would be busier than NYC. Sometimes you have to give life a little kick to get where you want to go! All in all, we are happy and we're still waiting to adopt. 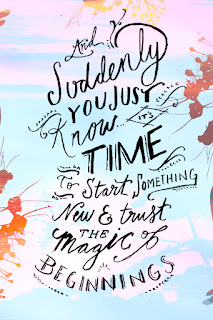 If you or someone that you know is thinking about making an adoption plan, we ask that you think of us. Thank you! http://www.marlonandjenniferadoption.com